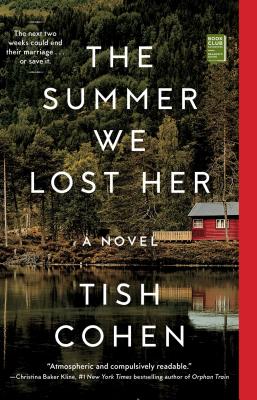 The Summer We Lost Her

Faced with the possibility that they’ll never see their daughter again, Elise and Matt struggle to come to terms with what their future may bring. The fate of the family property, the history of this not-so-tiny town, and the limits of Matt and Elise’s love for each other are inextricably bound up with Gracie’s disappearance. Everything for the Sorenson family is about to change—the messy tangle of their past, the harrowing truth of their present, and whether or not their love will survive a parent’s worst nightmare.

Praise For The Summer We Lost Her…

"How much stress can a marriage take? Tish Cohen answers this question with skill and artistry, capturing subtle shifts in mood and feeling as she escalates the pressure on her characters. They’re forced to face their own foibles and weaknesses as well as each other’s as they confront the mystery at the heart of this story. Atmospheric and compulsively readable.”

"The Summer We Lost Her is a compelling and complex portrait of a marriage and regret.  Cohen spins a moving story with a high-stakes plot that won't let you go until you know the family's fate."
— Heidi W. Durrow, New York Times bestselling author of The Girl Who Fell From the Sky

"Cohen writes with command of a strained marriage facing unfathomable challenge, knowing precisely when to reveal and when to withhold. Deftly plotted and tensely paced, The Summer We Lost Her is impossible to put down."
— Cathy Marie Buchanan, New York Times bestselling author of The Painted Girls

"At first glance Tish Cohen’s astonishingly profound novel is an exquisitely written drama about a missing disabled little girl, but brace yourself, because that’s just the top layer. Set against the background of competitive equestrian riding, The Summer We Lost Her dazzlingly unfolds the complexities of a fracturing marriage, the secrets we build our dreams on, and the fierce yearning to be someone other than who we really are. Compassionate, startling, and so full of life, the pages breathe."
— Caroline Leavitt, New York Times bestselling author of Pictures of You, Is This Tomorrow, and Cruel Beautiful World

"A complex and beautifully told story of a marriage in crisis, and the myriad ways our personal histories and our regrets come back to haunt us.  Tish Cohen's characters are complicated and flawed and wonderfully precise, and somehow, by the time you turn the final pages of The Summer We Lost Her, they come to feel like family."
— Julie Buxbaum, New York Times bestselling author of What To Say Next

“In this gripping and searing portrait of a marriage on the brink, Tish Cohen kept me on the edge of my seat through every twist and turn of her cleverly crafted plot.”
— Nicola Kraus, #1 New York Times bestselling coauthor of The Nanny Diaries

“A sharp, suspenseful portrait of a family on the verge of collapse.”
— Kirkus Reviews

"Nuanced characters and high-stakes drama drive the plot in Cohen’s latest. Tense and emotional, readers will keep turning pages to find out if Gracie is returned home safely."
— Publishers Weekly

"Fans of Kristin Hannah and Jodi Picoult will enjoy this intense, character-driven story with the fate of a marriage at its heart."
— Booklist

"A heartbreaking tale of events no parent should ever have to endure . . . intriguing and filled with passion."
— New York Journal of Books

"A finely nuanced, well-crafted family drama that succeeds in depicting the impact of child abduction on an already fragile marital bond."
— The Patriot Ledger

Tish Cohen is the author of bestselling novels for adults and young readers, many of them in development for film. Her first novel, Town House, was a regional finalist for the Commonwealth Writers’ Prize for Best First Book. Cohen’s short film, Russet Season, had its US premiere at the San Diego Jewish Film Festival in 2017. She lives in Toronto.
Loading...
or support indie stores by buying on