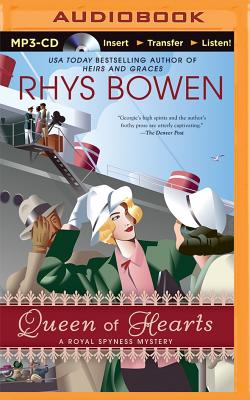 Lady Georgiana Rannoch, 35th in line for the British throne, knows how to play the part of an almost royal--but now she's off to Hollywood, where she must reprise her role as sleuth or risk starring in an all-too-convincing death scene....

My mother, the glamorous and much-married actress, is hearing wedding bells once again--which is why she must hop across the pond for a quickie divorce in Reno. To offer my moral support, and since all expenses are paid by her new hubby-to-be, Max, I agree to make the voyage with her.

Crossing the Atlantic, with adventure in the air and wealthy men aboard, Mother all but forgets about Max and matrimony--especially when movie mogul Cy Goldman insists on casting her in his next picture.

Meanwhile, I find myself caught up in the secret investigation of a suspected jewel thief. Lucky for me, the lead investigator happens to be my dashing beau, Darcy

Mother's movie and Darcy's larceny lead everyone to Cy's Hollywood home, where the likes of Charlie Chaplin are hanging about and there's enough romantic intrigue to fill a double feature. But we hardly get a chance to work out the sleeping arrangements before Cy turns up dead--as if there wasn't enough drama already.