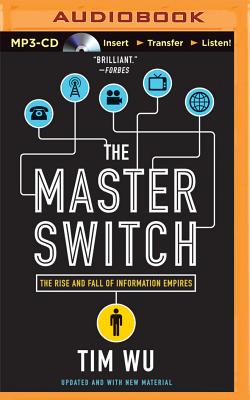 It is easy to forget that every development in the history of the American information industry--from the telephone to radio to film--once existed in an open and chaotic marketplace inhabited by entrepreneurs and utopians, just as the Internet does today. Each of these, however, grew to be dominated by a monopolist or cartel. In this path-breaking audiobook, Tim Wu asks: will the Internet follow the same fate? Could the Web--the entire flow of American information--come to be ruled by a corporate leviathan in possession of "the master switch"?

Analyzing the strategic maneuvers of today's great information powers--Apple, Google, and an eerily resurgent AT&T--Wu uncovers a time-honored pattern in which invention begets industry and industry begets empire. He shows how a battle royal for the Internet's future is brewing, and this is one war we dare not tune out.

"Entertaining.... There's a sharp insight and a surprising fact on nearly every page of Wu's masterful survey." --The Boston Globe