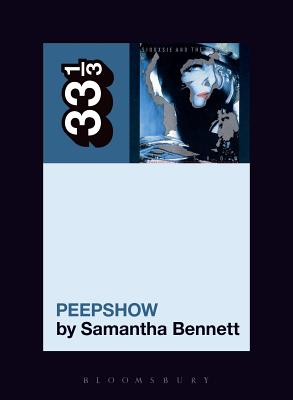 In 1978, Siouxsie and the Banshees declared 'We don't see ourselves in the same context as other rock'n'roll bands.' A decade later, and in the stark aftermath of a devastating storm, the band retreated to a 17th-century mansion house in the deracinated Sussex countryside to write their ninth studio album, Peepshow. Here, the band absorbed the bygone, rural atmosphere and its inspirational mise en sc ne, thus framing the record cinematically, as Siouxsie Sioux recalled, 'It was as if we were doing the whole thing on the set of The Wicker Man'.

Samantha Bennett looks at how Siouxsie and the Banshees' Peepshow is better understood in the context of film and film music (as opposed to popular music studies or, indeed, the works of other rock'n'roll bands). Drawing upon more than one hundred films and film scores, this book focuses on Peepshow's deeply embedded historical and aesthetic (para)cinematic influences: How is each track a reflection of genre film? Who are the various featured protagonists? And how does Peepshow's diverse orchestration, complex musical forms, atypical narratives and evocative soundscapes reveal an inherently cinematic record? Ultimately, Peepshow can be read as a soundtrack to all the films Siouxsie and the Banshees ever saw. Or perhaps it was the soundtrack to the greatest film they never made.

Samantha Bennett is a sound recordist, guitarist, and Associate Professor in Music at the Australian National University, Australia. She is widely published in the areas of popular music sound recording, technology and production.
or support indie stores by buying on
Copyright © 2020 American Booksellers Association