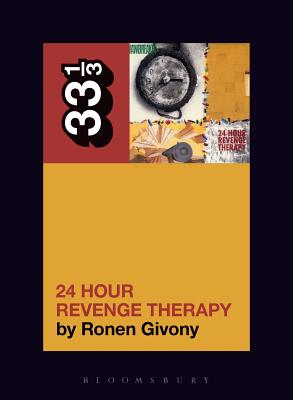 Two and a half decades on, Jawbreaker's 24 Hour Revenge Therapy (1993-94) is the rare album to have lost none of its original loyalty, affection, and reverence. If anything, today, the cult of Jawbreaker-in their own words, "the little band that could but would probably rather not"-is now many times greater than it was when they broke up in 1996. Like the best work of Fugazi, The Clash, and Operation Ivy, the album is now is a rite of passage and a beloved classic among partisans of intelligent, committed, literary punk music and poetry.

Why, when a thousand other artists came and went in that confounding decade of the 90s, did Jawbreaker somehow come to seem like more than just another band? Why do they persist, today, in meaning so much to so many people? And how did it happen that, two years after releasing their masterpiece, the band that was somehow more than just a band to its fans-closer to equipment for living-was no longer?

Ronen Givony's 24 Hour Revenge Therapy is an extended tribute in the spirit of Nicholson Baker's U & I a passionate, highly personal, and occasionally obsessive study of one of the great confessional rock albums of the 90s. At the same time, it offers a quizzical look back to the toxic authenticity battles of the decade, ponders what happened to the question of "selling out," and asks whether we today are enriched or impoverished by that debate becoming obsolete.

Ronen Givony is the founder/producer of New York's Wordless Music series and orchestra (wordlessmusic.org), which has presented concerts around the world with artists from the sound worlds of so-called classical and contemporary music since 2006, and was named by the Village Voice as New York's "Best Moderately Snooty Concert Series." A native of South Florida, he has worked for Nonesuch Records and Lincoln Center, and received his bachelor's and master's degrees in English literature from Yale University. His favorite Jawbreaker song is "Do You Still Hate Me?"
or support indie stores by buying on
Copyright © 2020 American Booksellers Association