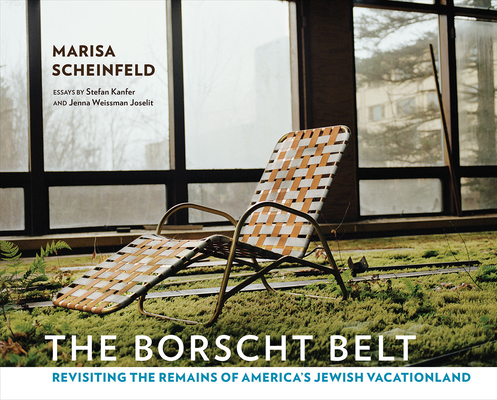 Today the Borscht Belt is recalled through the nostalgic lens of summer swims, Saturday night dances, and comedy performances. But its current state, like that of many other formerly glorious regions, is nothing like its earlier status. Forgotten about and exhausted, much of its structural environment has been left to decay. The Borscht Belt, which features essays by Stefan Kanfer and Jenna Weissman Joselit, presents Marisa Scheinfeld's photographs of abandoned sites where resorts, hotels, and bungalow colonies once boomed in the Catskill Mountain region of upstate New York.The book assembles images Scheinfeld has shot inside and outside locations that once buzzed with life as year-round havens for generations of people. Some of the structures have been lying abandoned for periods ranging from four to twenty years, depending on the specific hotel or bungalow colony and the conditions under which it closed. Other sites have since been demolished or repurposed, making this book an even more significant documentation of a pivotal era in American Jewish history.The Borscht Belt presents a contemporary view of more than forty hotel and bungalow sites. From entire expanses of abandoned properties to small lots containing drained swimming pools, the remains of the Borscht Belt era now lie forgotten, overgrown, and vacant. In the absence of human activity, nature has reclaimed the sites, having encroached upon or completely overtaken them. Many of the interiors have been vandalized or marked by paintball players and graffiti artists. Each ruin lies radically altered by the elements and effects of time. Scheinfeld's images record all of these developments.

Marisa Scheinfeld's photography has been exhibited nationally and internationally and is among the collections of The Center for Jewish History, The National Yiddish Book Center, The Simon Wiesenthal Center, and The Edmund and Nancy K. Dubois Library at the Museum of Photographic Arts. Stefan Kanfer is a contributing editor of City Journal and the author of A Summer World: The Attempt to Build a Jewish Eden in the Catskills, from the Days of the Ghetto to the Rise and Decline of the Borscht Belt. Jenna Weissman Joselit is Charles E. Smith Professor of Judaic Studies and Professor of History at The George Washington University, where she also directs two graduate programs in Jewish cultural arts. She is the author of The Wonders of America: Reinventing Jewish Culture, 1880-1950 and A Perfect Fit: Clothes, Character, and the Promise of America.
Loading...
or support indie stores by buying on