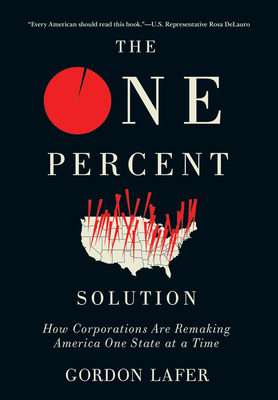 How Corporations Are Remaking America One State at a Time

In the aftermath of the 2010 Citizens United decision, it's become commonplace to note the growing political dominance of a small segment of the economic elite. But what exactly are those members of the elite doing with their newfound influence? The One Percent Solution provides an answer to this question for the first time. Gordon Lafer's book is a comprehensive account of legislation promoted by the nation's biggest corporate lobbies across all fifty state legislatures and encompassing a wide range of labor and economic policies.

In an era of growing economic insecurity, it turns out that one of the main reasons life is becoming harder for American workers is a relentless--and concerted--offensive by the country's best-funded and most powerful political forces: corporate lobbies empowered by the Supreme Court to influence legislative outcomes with an endless supply of cash. These actors have successfully championed hundreds of new laws that lower wages, eliminate paid sick leave, undo the right to sue over job discrimination, and cut essential public services.

Lafer shows how corporate strategies have been shaped by twenty-first-century conditions--including globalization, economic decline, and the populism reflected in both the Trump and Sanders campaigns of 2016. Perhaps most important, Lafer shows that the corporate legislative agenda has come to endanger the scope of democracy itself.

For anyone who wants to know what to expect from corporate-backed Republican leadership in Washington, D.C., there is no better guide than this record of what the same set of actors has been doing in the state legislatures under its control.

Gordon Lafer is Associate Professor at the Labor Education and Research Center at the University of Oregon. He is the author of The One Percent Solution: How Corporations Are Remaking America One State at a Time and The Job Training Charade, both from Cornell. He has served as Senior Policy Advisor for the U.S. Congress and has been called to testify as an expert witness before multiple state legislatures.
Loading...
or support indie stores by buying on