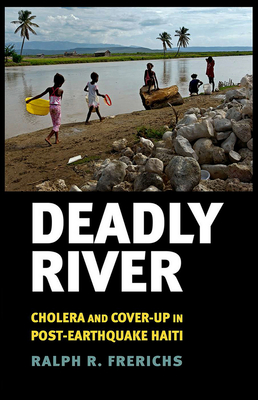 In October 2010, nine months after the massive earthquake that devastated Haiti, a second disaster began to unfold--soon to become the world's largest cholera epidemic in modern times. In a country that had never before reported cholera, the epidemic mysteriously and simultaneously appeared in river communities of central Haiti, eventually triggering nearly 800,000 cases and 9,000 deaths. What had caused the first cases of cholera in Haiti in recorded history? Who or what was the deadly agent of origin? Why did it explode in the agricultural-rich delta of the Artibonite River? When answers were few, rumors spread, causing social and political consequences of their own. Wanting insight, the Haitian government and French embassy requested epidemiological assistance from France. A few weeks into the epidemic, physician and infectious disease specialist Renaud Piarroux arrived in Haiti.In Deadly River, Ralph R. Frerichs tells the story of the epidemic--of a French disease detective determined to trace its origins so that he could help contain the spread and possibly eliminate the disease--and the political intrigue that has made that effort so difficult. The story involves political maneuvering by powerful organizations such as the United Nations and its peacekeeping troops in Haiti, as well as by the World Health Organization and the U.S. Centers for Disease Control. Frerichs explores a quest for scientific truth and dissects a scientific disagreement involving world-renowned cholera experts who find themselves embroiled in intellectual and political turmoil in a poverty-stricken country.Frerichs's narrative highlights how the world's wealthy nations, nongovernmental agencies, and international institutions respond when their interests clash with the needs of the world's most vulnerable people. The story poses big social questions and offers insights not only on how to eliminate cholera in Haiti but also how nations, NGOs, and international organizations such as the UN and CDC deal with catastrophic infectious disease epidemics.

Ralph R. Frerichs is Professor Emeritus of Epidemiology at UCLA.
Loading...
or support indie stores by buying on