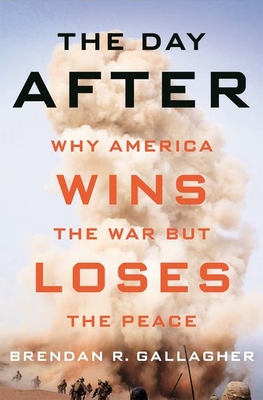 The Day After (Hardcover)

Why America Wins the War But Loses the Peace

Since 9/11, why have we won smashing battlefield victories only to botch nearly everything that comes next? In the opening phases of war in Afghanistan, Iraq, and Libya, we mopped the floor with our enemies. But in short order, things went horribly wrong.

We soon discovered we had no coherent plan to manage the "day after." The ensuing debacles had truly staggering consequences--many thousands of lives lost, trillions of dollars squandered, and the apparent discrediting of our foreign policy establishment. This helped set the stage for an extraordinary historical moment in which America's role in the world, along with our commitment to democracy at home and abroad, have become subject to growing doubt. With the benefit of hindsight, can we discern what went wrong? Why have we had such great difficulty planning for the aftermath of war?

In The Day After, Brendan Gallagher--an Army lieutenant colonel with multiple combat tours to Iraq and Afghanistan, and a Princeton Ph.D.--seeks to tackle this vital question. Gallagher argues there is a tension between our desire to create a new democracy and our competing desire to pull out as soon as possible. Our leaders often strive to accomplish both to keep everyone happy. But by avoiding the tough underlying decisions, it fosters an incoherent strategy. This makes chaos more likely.

The Day After draws on new interviews with dozens of civilian and military officials, ranging from US cabinet secretaries to four-star generals. It also sheds light on how, in Kosovo, we lowered our postwar aims to quietly achieve a surprising partial success. Striking at the heart of what went wrong in our recent wars, and what we should do about it, Gallagher asks whether we will learn from our mistakes, or provoke even more disasters? Human lives, money, elections, and America's place in the world may hinge on the answer.

Brendan R. Gallagher is a US Army lieutenant colonel in the infantry who has completed seven tours to Iraq and Afghanistan, including multiple deployments with the 75th Ranger Regiment. He received the General George C. Marshall award as the top US graduate at the Army Command and General Staff College, and is currently a battalion commander. He holds a PhD in public and international affairs from Princeton.
or
Buy Here
Copyright © 2020 American Booksellers Association