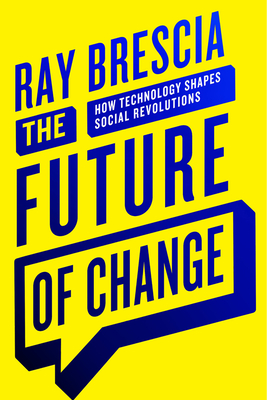 The Future of Change (Hardcover)

In The Future of Change, Ray Brescia identifies a series of "social innovation moments" in American history. Through these moments--during which social movements have embraced advances in communications technologies--he illuminates the complicated, dangerous, innovative, and exciting relationship between these technologies, social movements, and social change. Brescia shows that, almost without fail, developments in how we communicate shape social movements, just as those movements change the very technologies themselves.

Ray Brescia is the Hon. Harold R. Tyler Chair in Law & Technology and a Professor of Law at Albany Law School. Before, he was a lawyer and community organizer in New York City, working in Harlem, Washington Heights, the South Bronx, and Chinatown to promote housing rights, worker rights, and economic development. He has held positions at the Urban Justice Center, the New Haven Legal Assistance Association, and the Legal Aid Society of New York, where he was a Skadden Fellow, and as a law clerk to the Hon. Constance Baker Motley, United States District Court Judge. Follow him on Twitter @rbrescia.
or
Pre-Order Now
Copyright © 2020 American Booksellers Association