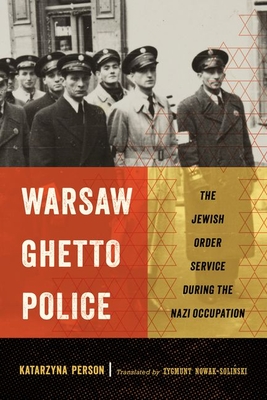 The Jewish Order Service During the Nazi Occupation

In Warsaw Ghetto Police, Katarzyna Person shines a spotlight on the lawyers, engineers, young yeshiva graduates, and sons of connected businessmen who, in the autumn of 1940, joined the newly formed Jewish Order Service.

Person tracks the everyday life of policemen as their involvement with the horrors of ghetto life gradually increased. Facing and engaging with brutality, corruption, and the degradation and humiliation of their own people, these policemen found it virtually impossible to exercise individual agency. While some saw the Jewish police as fellow victims, others viewed them as a more dangerous threat than the German occupation authorities; both were held responsible for the destruction of a historically important and thriving community. Person emphasizes the complexity of the situation, the policemen's place in the network of social life in the ghetto, and the difficulty behind the choices that they made. By placing the actions of the Jewish Order Service in historical context, she explores both the decisions that its members were forced to make and the consequences of those actions.

Featuring testimonies of members of the Jewish Order Service, and of others who could see them as they themselves could not, Warsaw Ghetto Police brings these impossible situations to life. It also demonstrates how a community chooses to remember those whose allegiances did not seem clear.

Published in Association with the US Holocaust Memorial Museum.

Katarzyna Person is a historian working at the Jewish Historical Institute in Warsaw, and author of Assimilated Jews in the Warsaw Ghetto.
Loading...
or support indie stores by buying on