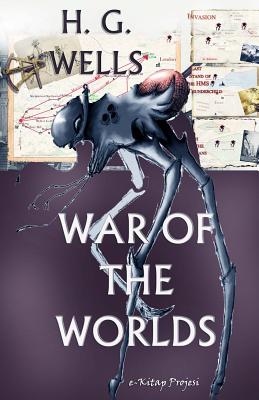 War of the Worlds

The War of the Worlds is a military science fiction novel by H. G. Wells. It first appeared in serialized form in 1897, published simultaneously in Pearson's Magazine in the UK and Cosmopolitan magazine in the US. The first appearance in book form was published by William Heinemann of London in 1898. It is the first-person narrative of the adventures of an unnamed protagonist and his brother in Surrey and London as Earth is invaded by Martians. Written between 1895 and 1897, it is one of the earliest stories that detail a conflict between mankind and an extraterrestrial race. The novel is one of the most commented-on works in the science fiction canon. The War of the Worlds has two parts, Book One: The Coming of the Martians and Book Two: The Earth under the Martians. The narrator, a philosophically-inclined author, struggles to return to his wife while seeing the Martians lay waste to southern England. Book One also imparts the experience of his brother, also unnamed, who describes events in the capital and escapes the Martians by boarding a ship near Tillingham, on the Essex coast. The plot has been related to invasion literature of the time. The novel has been variously interpreted as a commentary on evolutionary theory, British Imperialism, and generally Victorian superstitions, fears and prejudices. At the time of publication it was classified as a scientific romance, like his earlier novel The Time Machine. The War of the Worlds has been both popular (having never gone out of print) and influential, spawning half a dozen feature films, radio dramas, a record album, various comic book adaptations, a television series, and sequels or parallel stories by other authors. It has even influenced the work of scientists, notably Robert Hutchings Goddard. Plot Summary Yet across the gulf of space, minds that are to our minds as ours are to those of the beasts that perish, intellects vast and cool and unsympathetic, regarded this earth with envious eyes, and slowly and surely drew their plans against us. - H. G. Wells (1898), The War of the Worlds The Coming of the Martians The narrative opens in an astronomical observatory at Ottershaw where explosions are seen on the surface of the planet Mars, creating much interest in the scientific community. Later a "meteor" lands on Horsell Common, near the narrator's home in Woking, Surrey. He is among the first to discover that the object is an artificial cylinder that opens, disgorging Martians who are "big" and "greyish" with "oily brown skin," "the size, perhaps, of a bear," with "two large dark-coloured eyes," and a lipless "V-shaped mouth" surrounded by "Gorgon groups of tentacles." The narrator finds them "at once vital, intense, inhuman, crippled and monstrous." They briefly emerge, have difficulty in coping with the Earth's atmosphere, and rapidly retreat into the cylinder. A human deputation (which includes the astronomer Ogilvy) approaches the cylinder with a white flag, but the Martians incinerate them and others nearby with a heat-ray before beginning to assemble their machinery. Military forces arrive that night to surround the common, including Maxim guns. The population of Woking and the surrounding villages are reassured by the presence of the military. A tense day begins, with much anticipation of military action by the narrator.

Herbert George "H. G." Wells (21 September 1866 - 13 August 1946) was an English writer, now best known for his work in the science fiction genre. He was also a prolific writer in many other genres, including contemporary novels, history, politics and social commentary, even writing textbooks and rules for war games. Wells is sometimes called "The Father of Science Fiction", as are Jules Verne and Hugo Gernsback. His most notable science fiction works include The War of the Worlds, The Time Machine, The Invisible Man and The Island of Doctor Moreau. Wells's earliest specialised training was in biology, and his thinking on ethical matters took place in a specifically and fundamentally Darwinian context. He was also from an early date an outspoken socialist, often (but not always, as at the beginning of the First World War) sympathising with pacifist views. His later works became increasingly political and didactic, and he sometimes indicated on official documents that his profession was that of "Journalist." Most of his later novels were not science fiction. Some described lower-middle class life (Kipps; The History of Mr Polly), leading him to be touted as a worthy successor to Charles Dickens, but Wells described a range of social strata and even attempted, in Tono-Bungay (1909), a diagnosis of English society as a whole.
Loading...
or support indie stores by buying on