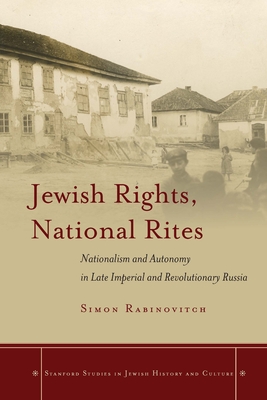 In its full-color poster for elections to the All-Russian Jewish Congress in 1917, the Jewish People's Party depicted a variety of Jews in seeking to enlist the support of the broadest possible segment of Russia's Jewish population. It forsook neither traditional religious and economic life like the Jewish socialist parties, nor life in Europe like the Zionists. It embraced Hebrew, Yiddish, and Russian as fulfilling different roles in Jewish life. It sought the democratization of Jewish communal self-government and the creation of new Russian Jewish national-cultural and governmental institutions. Most importantly, the self-named folkists believed that Jewish national aspirations could be fulfilled through Jewish autonomy in Russia and Eastern Europe more broadly. Ideologically and organizationally, this party's leadership would profoundly influence the course of Russian Jewish politics.

Jewish Rights, National Rights provides a completely new interpretation of the origins of Jewish nationalism in Russia. It argues that Jewish nationalism, and Jewish politics generally, developed in a changing legal environment where the idea that nations had rights was beginning to take hold, and centered on the demand for Jewish autonomy in Eastern Europe. Drawing on numerous archives and libraries in the United States, Russia, Ukraine, and Israel, Simon Rabinovitch carefully reconstructs the political movement for Jewish autonomy, its personalities, institutions, and cultural projects. He explains how Jewish autonomy was realized following the February Revolution of 1917, and for the first time assesses voting patterns in November 1917 to determine the extent of public support for Jewish nationalism at the height of the Russian revolutionary period.

Simon Rabinovitch is Assistant Professor in the Department of History at Boston University.
Loading...
or support indie stores by buying on