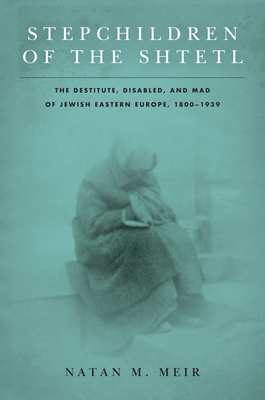 Stepchildren of the Shtetl

The Destitute, Disabled, and Mad of Jewish Eastern Europe, 1800-1939 (Stanford Studies in Jewish History and Culture)

Memoirs of Jewish life in the east European shtetl often recall the hekdesh (town poorhouse) and its residents: beggars, madmen and madwomen, disabled people, and poor orphans. Stepchildren of the Shtetl tells the story of these marginalized figures from the dawn of modernity to the eve of the Holocaust.

Combining archival research with analysis of literary, cultural, and religious texts, Natan M. Meir recovers the lived experience of Jewish society's outcasts and reveals the central role that they came to play in the drama of modernization. Those on the margins were often made to bear the burden of the nation as a whole, whether as scapegoats in moments of crisis or as symbols of degeneration, ripe for transformation by reformers, philanthropists, and nationalists. Shining a light into the darkest corners of Jewish society in eastern Europe-from the often squalid poorhouse of the shtetl to the slums and insane asylums of Warsaw and Odessa, from the conscription of poor orphans during the reign of Nicholas I to the cholera wedding, a magical ritual in which an epidemic was halted by marrying outcasts to each other in the town cemetery-Stepchildren of the Shtetl reconsiders the place of the lowliest members of an already stigmatized minority.

Natan M. Meir is the Lorry I. Lokey Professor of Judaic Studies at Portland State University.
Loading...
or support indie stores by buying on