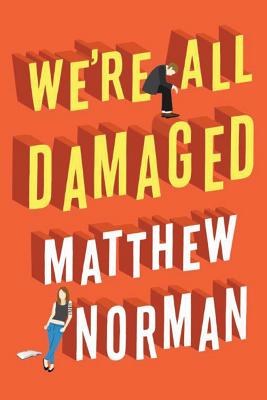 Andy Carter was happy. He had a solid job. He ran 5Ks for charity. He was living a nice, safe Midwestern existence. And then his wife left him for a handsome paramedic down the street.

We re All Damaged begins after Andy has lost his job, ruined his best friend's wedding, and moved to New York City, where he lives in a tiny apartment with an angry cat named Jeter that isn t technically his. But before long he needs to go back to Omaha to say good-bye to his dying grandfather.

Back home, Andy is confronted with his past, which includes his ex, his ex's new boyfriend, his right-wing talk-radio-host mother, his parents crumbling marriage, and his still-angry best friend.

As if these old problems weren t enough, Andy encounters an entirely new complication: Daisy. She has fifteen tattoos, no job, and her own difficult past. But she claims she is the only person who can help Andy be happy again, if only she weren t hiding a huge secret that will mess things up even more. Andy Carter needs a second chance at life, and Daisy and the person Daisy pushes Andy to become may be his last chance to set things right.