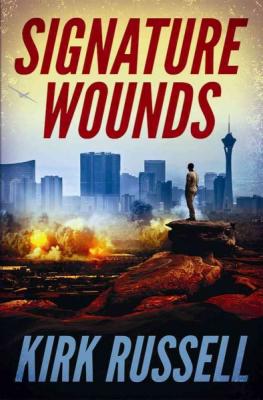 While in Las Vegas on his way to a family Fourth of July celebration, FBI bomb expert Paul Grale hears a deep blast and sees the smoke rising. In an unfolding nightmare, Grale discovers his sister, brother-in-law, and many friends were caught up in the explosion. Grief stricken, he is pulled from the main bomb investigation to sift orphan leads. Quietly he begins a relentless search for the bomb maker.

When the FBI suspects his friend and disgruntled former drone pilot for the blast, Grale thinks they're getting it all wrong. Propelled by deep personal loss and an intense need to do the right thing, he picks his way through the smallest of leads and into a maze of twists, turns, and sudden dead ends. When he uncovers another threat, time is already quickly running out. With the lives of so many at stake, Grale won't let himself fail--and he won't rest until there's justice for his family.

Adrenalized, gripping, and all too timely, Signature Wounds brings terror to Vegas and introduces FBI special agent and bomb tech Paul Grale, a man whose specialized skill and fierce determination are a lethal combination.