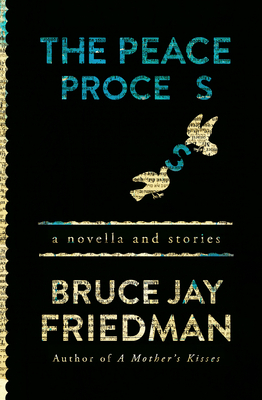 Silenced by the horrors of Nazi Germany, a Jewish satirist is inspired to write again by his biggest fan: Joseph Goebbels. A retired English teacher dies on the operating table and wakes up to an afterlife in which literature does not exist; he can claim any masterpiece as his own, from The Catcher in the Rye to Crime and Punishment--if only he can remember what actually happens in those stories. On his first trip to the Holy Land, a down-on-his-luck filmmaker reluctantly agrees to help a young Israeli Arab escape to New York, only to watch in dismay as the upstart lands a buxom, Yiddish-speaking girlfriend and a monster movie deal.

Mario Puzo once said that the world of Bruce Jay Friedman's short fiction is "like a Twilight Zone with Charlie Chaplin." Ironic, clever, perceptive, and hysterical, The Peace Process is vintage Friedman--fourteen finely crafted tales that take dead aim at the sweet spot between pleasure and pain.

Bruce Jay Friedman (1930-2020) was a novelist, short story writer, playwright, memoirist, and screenwriter. He was the author of many books, including Stern (1962), A Mother's Kisses (1964), The Lonely Guy's Book of Life (1978), and Lucky Bruce: A Literary Memoir (2011). His best-known works of stage and screen include the off-Broadway hit Steambath (1970) and the screenplays for the films Stir Crazy (1980) and Splash (1984), the latter of which received an Academy Award nomination. As editor of the anthology Black Humor (1965), Friedman helped popularize the distinctive literary style of that name in the United States and is widely regarded as one of its finest practitioners. According to the New York Times, his prose is "a pure pleasure machine."
or support indie stores by buying on
Copyright © 2020 American Booksellers Association