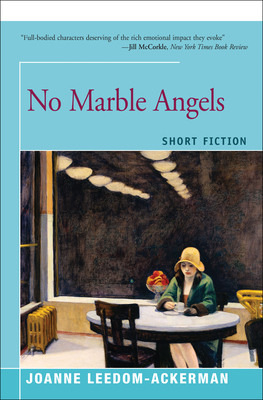 Characters in No Marble Angels struggle to close distances between each other, distances of race, sex, age.

Joanne Leedom-Ackerman is a novelist, short story writer, and journalist. Her works of fiction include The Dark Path to the River and No Marble Angels. She has also published fiction and essays in books and anthologies, including Short Stories of the Civil Rights Movement; Remembering Arthur Miller; Electric Grace; Snakes: An Anthology of Serpent Tales; Beyond Literacy; Women For All Seasons; Fiction and Poetry by Texas Women; The Bicentennial Collection of Texas Short Stories; What You Can Do. As a reporter for The Christian Science Monitor early in her career, Joanne won awards for her nonfiction and has published hundreds of articles in newspapers and magazines. She has taught writing at New York University, City University of New York, Occidental College, and the University of California at Los Angeles extension. She holds a Master of Arts degree from both Brown University and Johns Hopkins University, and graduated cum laude from Principia College. Joanne is a Vice President of PEN International and the former International Secretary of PEN International and former Chair of PEN International's Writers in Prison Committee. She currently serves on the boards of PEN American Center, the PEN/Faulkner Foundation, Poets and Writers, the International Center for Journalists, the International Crisis Group, and Refugees International. She is also a member of the Board of Trustees of Johns Hopkins University, trustee emeritus of Brown University, and director emeritus of Human Rights Watch. She has served on the Board of Trustees of Save the Children and on Save the Children's Advisory Board on Global Education. A member of the Advisory Board of the United States Institute of Peace, Joanne was an adviser on the PBS documentary A Force More Powerful: A Century of Nonviolent Conflict. She is a member of the Council on Foreign Relations, PEN American Center, PEN USA, English PEN, and the Authors Guild. Joanne is married and has two sons.
Loading...
or support indie stores by buying on