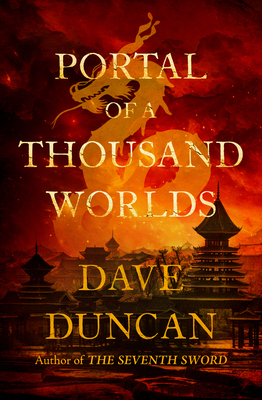 Portal of a Thousand Worlds (Paperback)

The looming threat of a once-in-a-millennium magical event sends nineteenth-century China into violent chaos in this epic alternate-history fantasy.

Author of the Seventh Sword series Dave Duncan transports us to Imperial China in an alternate nineteenth century--an Asian epoch not unlike the Boxer Rebellion era--with a spellbinding tale of rebellion, political intrigue, larceny, seduction, shape-shifting, dark magic, and murder. These are troubled years in the Good Land.

Ten centuries have passed since the last time the Portal of a Thousand Worlds opened, bringing chaos, upheaval, and radical change to the then-ruling dynasty, and now the mystical gateway is rumored to be on the verge of opening once more. Only the Firstborn--he who has been reincarnated through countless generations and remembers all he has ever learned--knows what the future holds, but he has been imprisoned for refusing to comply with a repressive imperial government's wishes.

Now, those hoping to seize the opportunity for wealth and position are hatching sinister plots. And as the cold-hearted dowager empress closely guards a fateful secret, and a rebel army led by a fanatical zealot gathers strength under the Bamboo Banner, the cataclysm approaches. . . .

The recipient of two Aurora Awards and numerous Locus and Endeavour Award nominations, Dave Duncan is an acknowledged master of sword-and-sorcery adventure on par with George R. R. Martin of Game of Thrones fame. A sprawling epic with a colorful cast of royals, thieves, prostitutes, gods, warriors, dragons, assassins, merchants, and mages set against the backdrop of a volatile alternate Asia, Portal of a Thousand Worlds is a magnificent work of invention from one of the premier fantasists of our day.

Dave Duncan (1933-2018) was born in Scotland, and received his diploma from Dundee High School and got his college education at the University of Saint Andrews. He moved to Canada in 1955, where he lived with his wife. Duncan spent thirty years as a petroleum geologist. He has had dozens of fantasy and science fiction novels published, among them A Rose-Red City, Magic Casement, and The Reaver Road, as well as a highly praised historical novel, Daughter of Troy, published, for commercial reasons, under the pseudonym Sarah B. Franklin. He also published the Longdirk series of novels, Demon Sword, Demon Knight, and Demon Rider, under the name Ken Hood. In the fall of 2007, Duncan's 2006 novel, Children of Chaos, published by Tor Books, was nominated for both the Prix Aurora Award and the Endeavour Award. In May 2013, Duncan, a 1989 founding member of SFCanada, was honored by election as a lifetime member by his fellow writers, editors, and academics. He passed away in 2018. Visit https: //www.daveduncanauthor.com/ for more information on the author.
or support indie stores by buying on
Copyright © 2020 American Booksellers Association