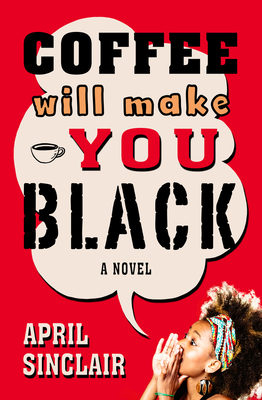 Coffee Will Make You Black

"A funny, fresh novel about growing up African-American in 1960s Chicago" by an author who "writes like Terry McMillan's kid sister" (Entertainment Weekly). In this hilarious and insightful coming-of-age novel, author April Sinclair introduces the charming Jean "Stevie" Stevenson, a young woman raised on Chicago's South Side during an era of irrevocable social upheaval. Curious and witty, bold but na ve, Stevie grows up debating the qualities of good hair and dark skin. As the years pass, her family and neighborhood are changed by the times, from the War on Poverty to race riots and the assassination of Martin Luther King Jr., from "Black Is Beautiful" to Black Power. Against this remarkable backdrop, Stevie makes the sometimes harrowing, often comic, always enthralling transformation into a young adult--socially aware, discovering her sexuality, and proud of her identity. "Whether she's dealing with a subject as monumental as the civil rights movement or as intimate as Stevie's first sexual encounters," writes the Los Angeles Times, "Sinclair never fails to make you laugh and never sacrifices the narrative to make a point." Winner of the Carl Sandburg Award from the Friends of the Chicago Public Library and named a best book of the year in young adult fiction by the American Library Association, Coffee Will Make You Black is an exquisite portrait of adolescence that will resonate with readers of all ages.

April Sinclair is the acclaimed, award-winning author of three novels. Her debut, Coffee Will Make You Black, was named Book of the Year (Young Adult Fiction) for 1994 by the American Library Association, and it received the Carl Sandburg Award from the Friends of the Chicago Public Library. The sequel to Coffee Will Make You Black, titled Ain't Gonna Be the Same Fool Twice, was published in 1995 followed by the novel I Left My Back Door Open. Sinclair has been a fellow at the Djerassi, Yaddo, MacDowell, and Ragdale artist colonies. She worked for fifteen years in community service programs, and has taught reading and creative writing to inner-city youth. Born and raised in Chicago, she currently lives on an island connected by bridges and a tunnel to Oakland, California.
Loading...
or support indie stores by buying on