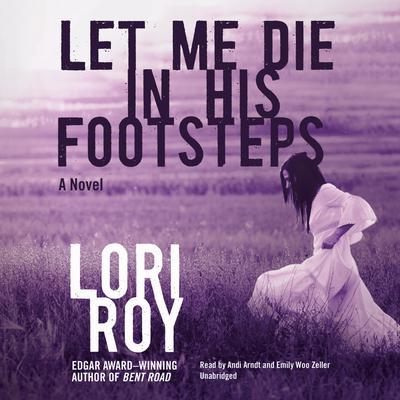 Let Me Die in His Footsteps (Digital Audiobook)

In the spellbinding and suspenseful Let Me Die in His Footsteps, Edgar Award-winner Lori Roy wrests from a southern town the secrets of two families touched by an evil that has passed between generations.On a dark Kentucky night in 1952 exactly halfway between her fifteenth and sixteenth birthdays, Annie Holleran crosses into forbidden territory. Everyone knows Hollerans don't go near Baines-not since Joseph Carl was buried two decades before-but, armed with a silver-handled flashlight, Annie runs through her family's lavender fields toward the well on the Baines' place. At the stroke of midnight, she gazes into the water in search of her future. Not finding what she had hoped for, she turns from the well and when the body she sees there in the moonlight is discovered come morning, Annie will have much to explain and a past to account for.It was 1936, and there were seven Baine boys. That year, Annie's aunt, Juna Crowley, with her black eyes and her long blond hair, came of age. Before Juna, Joseph Carl had been the best of all the Baine brothers. But then he looked into Juna's eyes and they made him do things that cost innocent people their lives. Sheriff Irlene Fulkerson saw justice served-or did she?As the lavender harvest approaches and she comes of age as Aunt Juna did in her own time, Annie's dread mounts. Juna will come home now, to finish what she started. If Annie is to save herself, her family, and this small Kentucky town, she must prepare for Juna's return, and the revelation of what really happened all those years ago.

Lori Roy was born and raised in the Midwest, where she worked for years as a tax accountant before turning her focus to writing. She is the author of the Edgar Award–winning novel Bent Road. She lives with her family in Florida.