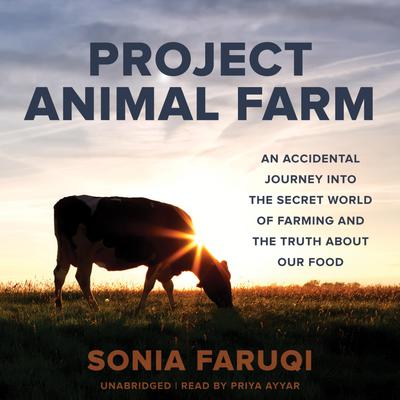 Project Animal Farm provides a riveting and revealing look at what truly happens behind farm doors, as discovered by a fearless young woman.Sonia Faruqi, a twenty-five-year-old Ivy League graduate and investment banker, had no idea that the night she arrived at the doorstep of an organic dairy farm would mark the beginning of a journey that would ultimately wind all the way around the world. Instead of turning away from the animal cruelty she would come to witness, Sonia made the most courageous decision of her life-a commitment to change our current system of food production.Driven by impulsive will and a new passion, Sonia left everything she knew and loved behind to search the planet for solutions that would benefit not only farm animals, but also human health, the environment, farmers, and consumers. In doing so, she would live with farmers, hitchhike with strangers, and repeatedly risk her life.Heartfelt and brimming with rare insights, Project Animal Farm takes listeners through a top secret tour of egg warehouses in Canada, dairy feedlots in the United States, farm offices in Mexico, lush Mennonite pastures in Belize, flocks of chickens in Indonesia, and factory farms in Malaysia.Lively and filled with insight and suspense, Project Animal Farm illuminates a hidden world that plays a part in all of our lives.