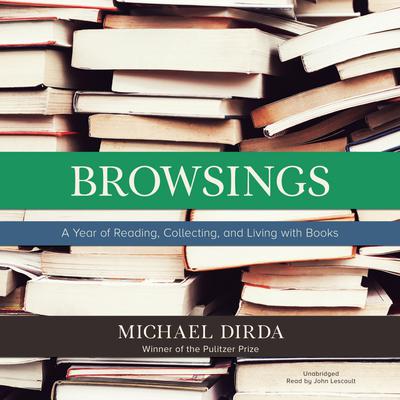 A Year of Reading, Collecting, and Living with Books

From Pulitzer Prize-winning book critic Michael Dirda comes a collection of his most personal and engaging essays on the literary life-the perfect companion for any lover of books.Michael Dirda has been hailed as "the best-read person in America" by the Paris Review and "the best book critic in America" by the New York Observer. In addition to the Pulitzer Prize, he was awarded for his reviews in the Washington Post, and he picked up an Edgar Award from the Mystery Writers of America for his book On Conan Doyle.Dirda's latest volume collects fifty of his witty and wide-ranging reflections on literary journalism, book collecting, and the writers he loves. Reaching from the classics to the postmoderns, his allusions dance from Samuel Johnson, Ralph Waldo Emerson, and M. F. K. Fisher to Marilynne Robinson, Hunter S. Thompson, and David Foster Wallace. Dirda's topics are equally diverse: literary pets, the lost art of cursive writing, book inscriptions, the pleasures of science fiction conventions, author photographs, novelists in old age, Oberlin College, a year in Marseille, writer's block, and much more, not to overlook a few rants about Washington life and American culture. As admirers of his earlier books will expect, there are annotated lists galore-of perfect book titles, great adventure novels, favorite words, essential books about books, and beloved children's classics, as well as a revealing peek at the titles Michael keeps on his own nightstand.Funny and erudite, occasionally poignant or angry, Browsings is a celebration of the reading life, a fan's notes, and the perfect gift for any book lover.

Michael Dirda is a Pulitzer Prize–winning critic and longtime book columnist for the Washington Post. He was once chosen by Washingtonian magazine as one of the twenty-five smartest people in our nation’s capital. He also writes regularly for the Times Literary Supplement, the New York Review of Books, and other literary journals. He is the author of the memoir An Open Book; the essay collections Readings, Bound to Please, Book by Book, and Classics for Pleasure; and On Conan Doyle, for which he won an Edgar Award. A lifelong Sherlock Holmes and Conan Doyle fan, he was inducted into the Baker Street Irregulars in 2002. He lives in Silver Spring, Maryland.