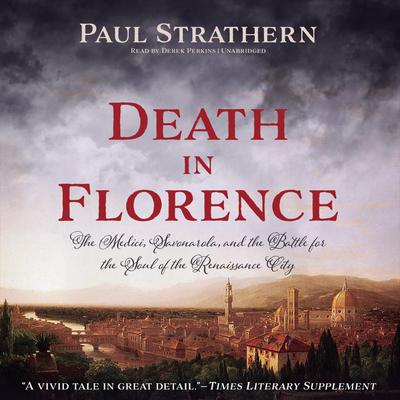 The Medici, Savonarola, and the Battle for the Soul of the Renaissance City

Death in Florence illuminates one of the defining moments in Western history-the bloody and dramatic story of the battle for the soul of Renaissance Florence.By the end of the fifteenth century, Florence was well established as the home of the Renaissance. As generous patrons to the likes of Botticelli and Michelangelo, the ruling Medici embodied the progressive humanist spirit of the age, and in Lorenzo de' Medici (Lorenzo the Magnificent) they possessed a diplomat capable of guarding the militarily weak city in a climate of constantly shifting allegiances between the major Italian powers.However, in the form of Savonarola, an unprepossessing provincial monk, Lorenzo found his nemesis. Filled with Old Testament fury and prophecies of doom, Savonarola's sermons reverberated among a disenfranchised population, who preferred medieval biblical certainties to the philosophical interrogations and intoxicating surface glitter of the Renaissance. Savonarola's aim was to establish a "City of God" for his followers, a new kind of democratic state, the likes of which the world had never seen before. The battle between these two men would be a fight to the death, a series of sensational events-invasions, trials by fire, the "Bonfire of the Vanities," terrible executions, and mysterious deaths-featuring a cast of the most important and charismatic Renaissance figures.Was this a simple clash of wills between a benign ruler and religious fanatic? Between secular pluralism and repressive extremism? In an exhilaratingly rich and deeply researched story, Paul Strathern reveals the paradoxes, self-doubts, and political compromises that made the battle for the soul of the Renaissance city one of the most complex and important moments in Western history.

Paul Strathern earned a degree in philosophy at Trinity College, Dublin, and has lectured in philosophy and mathematics. The author of many nonfiction books and of articles for numerous publications, he has also written several novels and has won the Somerset Maugham Prize. He lives and writes in London.