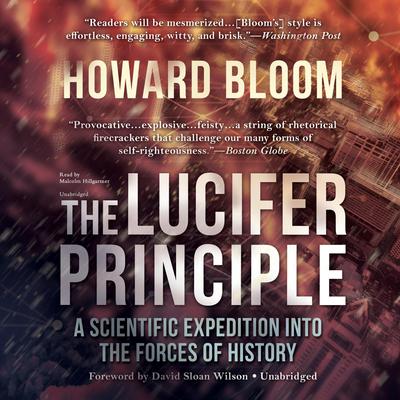 A Scientific Expedition into the Forces of History

The Lucifer Priciple is a revolutionary work that explores the intricate relationships among genetics, human behavior, and culture to put forth the thesis that "evil" is a by-product of nature's strategies for creation and that it is woven into our most basic biological fabric. Though this argument is not a new one-it has been brought forth by such great historical figures as St. Paul, Thomas Hobbes, and Raymond Dart-Howard Bloom here takes fresh data from a variety of sources and shapes it into a lens through which listeners can reinterpret the human experience.

Howard Bloom has debated one-on-one with senior officials from Egypt’s Muslim Brotherhood and Gaza’s Hamas on Iran’s al-Alam TV. He has dissected headline issues over thirty times on Saudi Arabia’s KSA2-TV, Ekhbariya TV, Economics TV, and on Iran’s global English-language Press-TV. Sheikh Mohammed bin Rashid Al Maktoum, Dubai’s ruler, who doubles as the prime minister of the United Arab Emirates, has named a racehorse after one of Bloom’s books. And Britain’s Channel 4 TV says Bloom is the Einstein, Newton, Darwin, and Freud of the twenty-first century.