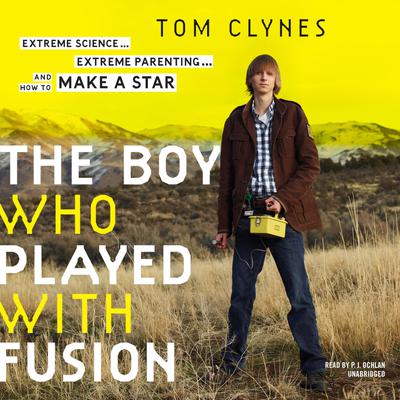 The Boy Who Played with Fusion (Digital Audiobook)

Extreme Science, Extreme Parenting, and How to Make a Star

This is the story of how an American teenager became the youngest person ever to build a working nuclear fusion reactor.By the age of nine, Taylor Wilson had mastered the science of rocket propulsion. At eleven, his grandmother's cancer diagnosis drove him to investigate new ways to produce medical isotopes. And by fourteen, Wilson had built a 500-million-degree reactor and become the youngest person in history to achieve nuclear fusion. How could someone so young achieve so much, and what can Wilson's story teach parents and teachers about how to support high-achieving kids?In The Boy Who Played with Fusion, science journalist Tom Clynes narrates Taylor's extraordinary journey-from his Arkansas home where his parents fully supported his intellectual passions; to a unique Reno, Nevada, public high school just for academic superstars; to the present, when now nineteen-year-old Wilson is winning international science competitions with devices designed to prevent terrorists from shipping radioactive material into the country. Along the way, Clynes reveals how our education system shortchanges gifted students-and what we can do to fix it.

Tom Clynes is a writer and photographer who covers the adventurous side of science, the environment, and education. He has reported on Ebola outbreaks and eco-mercenaries in central Africa, climatologists working in Greenland, and arsenic-loving microbes in California’s Mono Lake. He was a contributing editor at National Geographic Adventure for over a decade and now regularly writes for National Geographic, Men’s Journal, and Popular Science, where he is a contributing editor. He has also contributed to GQ, Conservation magazine, the Guardian, the London Times, Bicycling, Backpacker, and the Washington Post. His magazine stories have appeared multiple times in Best American Sports Writing and Best American Travel Writing. He is also a Knight-Wallace Fellow in journalism , an International Reporting Project fellow, and a two-time recipient of the Lowell Thomas Award. He currently lives in Ann Arbor, Michigan, and Brookline, Vermont.