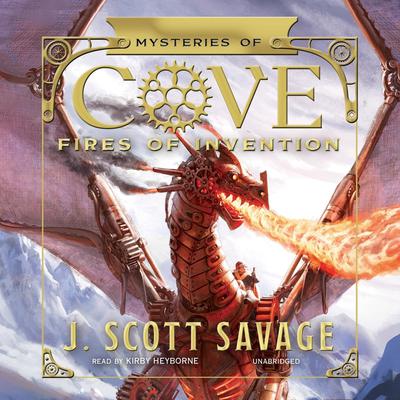 Fires of Invention (The Mysteries of Cove Series) (Digital Audiobook)

Trenton Colman is exceptionally creative with a knack for all things mechanical. But his talents are viewed with suspicion in Cove, a steam-powered city built inside a mountain. In Cove, creativity is a crime and “invention” is a curse word.

Kallista Babbage is a repair technician and daughter of the notorious Leo Babbage, who died in an explosion—an event the leaders of Cove point to as an example of the danger of creativity.

Working together, Trenton and Kallista learn that Leo Babbage was developing a secret project before he perished. Following clues he left behind, they begin to assemble a strange machine that is unlike anything they’ve ever seen before. They soon discover that what they are building may threaten every truth their city is founded on—and quite possibly their very lives.

J. Scott Savage is the author of the Farworld middle grade fantasy series and the Case File 13 middle grade monster series. He has been writing and publishing books for over ten years. He has visited hundreds of elementary schools, dozens of writers conferences, and taught many writing classes. He has four children and lives with his wife, Jennifer, in a windy valley of the Rocky Mountains.