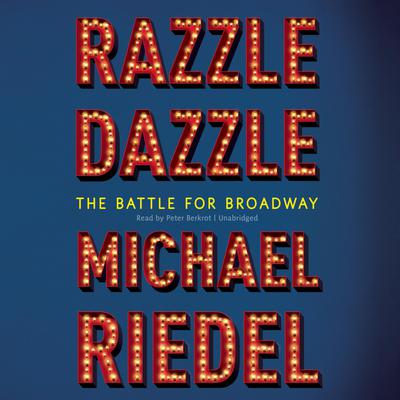 Razzle Dazzle is a provocative, no-holds-barred narrative account of the people, money, and power that reinvented an iconic quarter of New York City, turning its gritty back alleys and sex shops into the glitzy, dazzling Great White Way—and bringing a crippled New York from the brink of bankruptcy to its glittering glory.

In the 1970s Times Square was the seedy symbol of New York’s economic decline. Its once shining star, the renowned Shubert Organization, was losing theaters to make way for parking lots. Bernard Jacobs and Jerry Schoenfeld, two ambitious board members, saw the crumbling company was ripe for takeover and staged a coup amid corporate intrigue, personal betrayals, and criminal investigations. Once Jacobs and Schoenfeld solidified their power, they turned a collapsed theater-owning holding company into one of the most successful entertainment empires in the world, ultimately backing many of Broadway’s biggest hits, including A Chorus Line, Cats, Les Misérables, Phantom of the Opera, and Mamma Mia! They also sparked the revitalization of Broadway and the renewal of Times Square.

With wit and passion, Michael Riedel tells the stories of the Shubert Organization and the shows that rebuilt a city in grand style, revealing backstage drama that often rivaled what transpired onstage, exposing bitter rivalries, unlikely alliances, and of course, scintillating gossip.

Michael
Riedel
has been a theater columnist for
the New York Post since 1998. He
worked at the New York Daily News for five years before returning to the Post
and has written for the Guardian, Harper's Bazaar, Mirabella, Departures,
and Commentary. He is the executive
producer and cohost of Theater Talk on PBS, is a contributor to the BBC, and has appeared on Larry King Live, the Today show,
Good Morning America, and many other
news programs. Razzle Dazzle is his
first book.