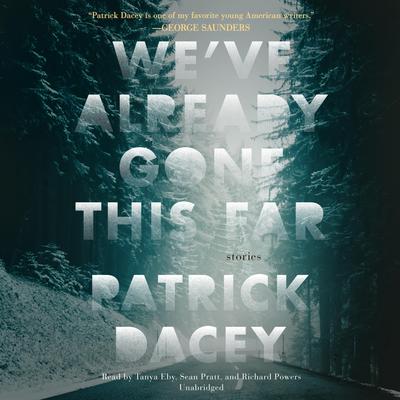 A heartfelt, vital collection; the debut of an exciting new talent already hailed as one of George Saunders’ “favorite young American writers”

In Patrick Dacey’s stunning debut, we meet longtime neighbors and friends—citizens of working-class Wequaquet—right when the ground beneath their feet has shifted in ways they don’t yet understand. Here, after more than a decade of boom and bust, love and pride are closely twinned and dangerously deployed: a lonely woman attacks a memorial to a neighbor’s veteran son; a dissatisfied housewife goes overboard with cosmetic surgery on national television; a young father walks away from one of the few jobs left in town; and a soldier writes home to a mother who is becoming increasingly unhinged. We’ve Already Gone This Far takes us to a town like many towns in America, a place where people are searching for what is now an almost out-of-reach version of the American Dream.

Story by story, Dacey draws us into the secret lives of recognizable strangers and reminds us that life’s strange intensity and occasional magic is all around us, especially in the everyday. With a skewering insight and real warmth of spirit, Dacey delivers that rare and wonderful thing in American fiction: a deeply felt, deeply imagined book about where we’ve been and how far we have to go.

Patrick Dacey holds an MFA from Syracuse University. He has taught English at several universities in the United States and Mexico and has worked as a reporter, landscaper, door-to-door salesman, and most recently on the overnight staff at a homeless shelter and detox center. His stories have been featured in Zoetrope All-Story, Guernica, Bomb magazine, and Salt Hill, among other publications. Originally from Cape Cod, he currently lives in Virginia.