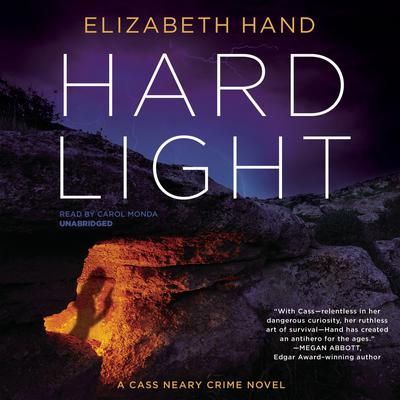 As her passionately devoted fans know, Elizabeth Hand is a uniquely gifted storyteller. Readers were introduced to her iconoclastic crime novels, featuring offbeat photographer Cass Neary, in the underground classic Generation Loss, which was followed by the brilliant Available Dark.

In Hard Light, the third book in the series, Cass makes a remarkable discovery that could change our understanding of human history—if she lives long enough to share it.

As the story opens, Cass arrives in London where she’s arranged to meet her long-lost lover, Quinn O’Boyle. When Quinn fails to show at their rendezvous point, Cass meets the eccentric couple Mallo and Morven Dunfries. When Mallo catches Cass rifling his medicine cabinet in search of drugs, he threatens to turn her in to the authorities, then puts her to work as a runner for his illegal goods.

Cass makes a delivery to Poppy Teasel, a famous singer from long ago. Cass leaves Poppy’s flat but returns a short time later to find the place ransacked and Poppy dead. Fearful she’ll become the next victim, Cass goes on the run.

Elizabeth Hand flunked out of college a couple of years after seeing Patti Smith perform and became involved in the nascent punk scenes in DC and New York. From 1979 to 1986 she worked at the Smithsonian Institution’s National Air & Space Museum. She was eventually readmitted to university to study cultural anthropology and received her BA. She is the author of many novels, including Winterlong, Waking the Moon, Glimmering, Mortal Love, Illyria, and Radiant Days, as well as three collections of stories, including the recent Saffron and Brimstone. Her fiction has received the Nebula, World Fantasy, Mythopeoic, Tiptree, and International Horror Guild Awards, and her novels have been chosen as notable books by both the New York Times and the Washington Post. She has also been awarded a Maine Arts Commission Fellowship. A regular contributor to the Washington Post Book World and the Magazine of Fantasy and Science Fiction, she lives with her family on the coast of Maine.