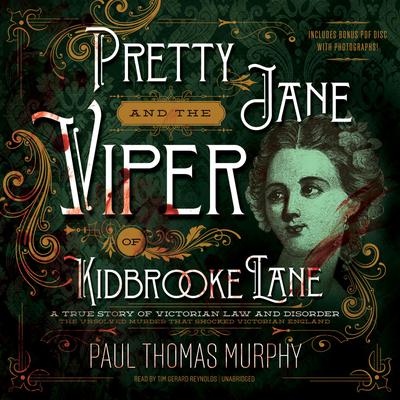 Pretty Jane and the Viper of Kidbrooke Lane (Digital Audiobook)

A True Story of Victorian Law and Disorder

A vivid and violent investigation into a shocking and unsolved 1871 murder in London, by the author of the New York Times Notable Book Shooting Victoria

On April 26th, 1871, a police constable walking one of London’s remotest beats stumbled upon a brutalized young woman kneeling on a muddy road—gashes were cloven into her skull, her left cheek was slashed open and smashed in, her right eye was destroyed, and above it a chunk of the temporal bone had been bashed out. The policeman gaped in horror as the woman held out her hand before collapsing into the mud, muttering “let me die” and slipping into a coma. Five days later, she died, her identity still unknown.

Within hours of her discovery on Kidbrooke Lane, scores of the officers of the Greenwich Division were involved in the investigation, and Scotland Yard had sent one of its top detectives, John Mulvany, to lead it. After five days of gathering evidence, the police discovered the girl’s identity: Jane Maria Clouson, a maid in the house of the renowned Pook family … and she was two months’ pregnant with Edmund Pook’s child when she died.

Murphy carefully reviews the evidence in the light of twenty-first-century forensic science in order to identify Jane’s killer as Edmund Walter Pook. Using a surprisingly abundant collection of primary sources, Murphy aims to re-create the drama of the case as it unfolded, with its many twists and turns, from the discovery of the body to the final crack of the gavel—and beyond.

Paul Thomas Murphy studied a variety of disciplines at universities in the United States, Canada, and Britain—most recently studying modern history at Oxford University. From 1982 until 2010 he taught at the University of Colorado, Boulder. He now lives with his family in the foothills of the Rocky Mountains and is working on a number of projects concerning Victorian history, literature, and culture.