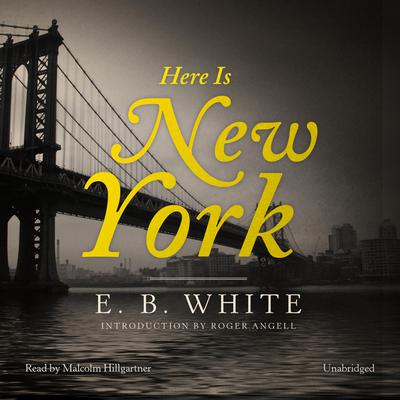 Perceptive, funny, and nostalgic, E. B. White's stroll around Manhattan remains the quintessential love letter to the city, written by one of America's foremost literary figures. The New York Times named Here Is New York one of the ten best books ever written about the metropolis, and the New Yorker called it "the wittiest essay, and one of the most perceptive, ever done on the city."Included with this essay are two short poems by E. B. White: "Commuter" and "Critic," both published in the New Yorker in 1925.

E. B. White (1899–1985) was an American author and long-time contributor to the New Yorker. He was the author of more than seventeen books of prose and poetry and coauthor of the English language style guide The Elements of Style but is especially well-known for his beloved children’s classics, Charlotte’s Web, Stuart Little, and The Trumpet of the Swan. He was elected to the American Academy of Arts and Letters in 1973. He won numerous other awards and medals, including a special Pulitzer Prize for his body of work in 1978 and the 1971 National Medal for Literature and the Laura Ingalls Wilder Medal, which commended him for making “a substantial and lasting contribution to literature for children.”