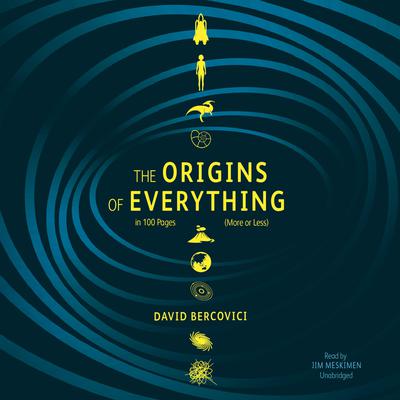 Covering 13.8 billion years, a calculatedly concise, wryly intelligent history of everything, from the Big Bang to the advent of human civilization

With wonder, wit, and flair-and in record time and space-geophysicist David Bercovici explains how everything came to be everywhere, from the creation of stars and galaxies to the formation of Earth's atmosphere and oceans to the origin of life and human civilization. Bercovici marries humor and legitimate scientific intrigue, rocketing listeners across nearly fourteen billion years and making connections between the essential theories that give us our current understanding of topics as varied as particle physics, plate tectonics, and photosynthesis. Bercovici's unique literary endeavor is a treasure trove of real, compelling science and fascinating history, providing both science lovers and complete neophytes with an unforgettable introduction to the fields of cosmology, geology, climate science, human evolution, and more.

David Bercovici is the Frederick William Beinecke Professor of Geology and Geophysics at Yale University. He is the recipient of numerous awards, a fellow of the American Geophysical Union, and a member of the American Academy of Arts and Sciences. He is an expert in planetary physics and studies the origin of plate tectonics, the deep interior of the Earth, and how volcanoes work.