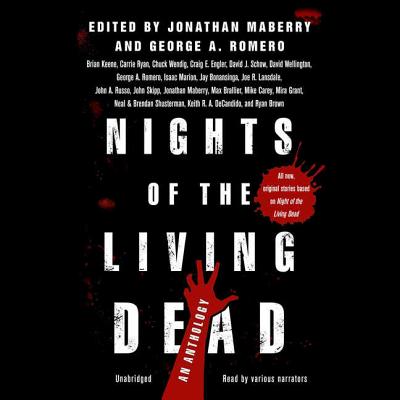 Nights of the Living Dead

In 1968 the world experienced a brand new kind of terror with the debut of George A. Romero's landmark film Night of the Living Dead. This was something new ... and terrifying. Since then, zombies have invaded every aspect of popular culture.But it all started on that dreadful night in a remote farmhouse.Nights of the Living Dead returns to that night, to the outbreak, to where it all began. New York Times bestselling author Jonathan Maberry teams up with the godfather of the living dead himself, George A. Romero, to present a collection of all-new tales set during the forty-eight hours of that legendary outbreak.Nights of the Living Dead includes stories by some of today's most important writers: Brian Keene, Carrie Ryan, Chuck Wendig, Craig Engler, David J. Schow, David Wellington, Issac Marion, Jay Bonansinga, Joe R. Lansdale, Joe McKinney, John Russo, John Skipp, Keith R. A. DeCandido, Max Brallier, Mike Carey, Mira Grant, Neal and Brandon Shusterman, and Sandra and Ryan Brown, plus original stories by Romero and Maberry.