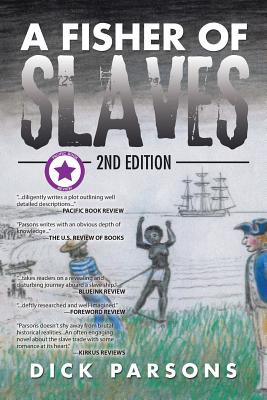 A Fisher of Slaves

Always having wanted to follow in the footsteps of his father killed in 1759 in the Battle of Quiberon Bay, 13 year old Nathaniel persuades his reluctant mother to allow him to pursue a career at sea, but owing to a foolish misunderstanding, he serves his apprenticeship on a slave-trading ship. Her new-found horror of the slave trade and fears that her innocent son will be corrupted by it fires an unrelenting desire for its abolition. Her son's life in a slaver, the horrors of the trade and her struggles to do "something for those poor creatures" are all beautifully bound up in this story which is difficult to put down.

Dick Parsons joined the Royal Navy as a Cadet in 1942 aged 13, retiring in 1979 as a Lieutenant Commander. Serving mainly in destroyers and frigates he has had two sea commands. He sails his own yacht Katy Mac, and has served as a crew member in the TS Royalist, a square rigger run by the Sea Cadet Corps. He has lived with his family in Singapore and Malta and his wide travels have included The Gambia and Ghana where the slave forts of Fort George, Cape Coast and Elmina sparked his interest in the Atlantic Slave trade. He is the author of "New Zealand - A Personal Discovery" and "Turbans."
Loading...
or
Not Currently Available for Direct Purchase