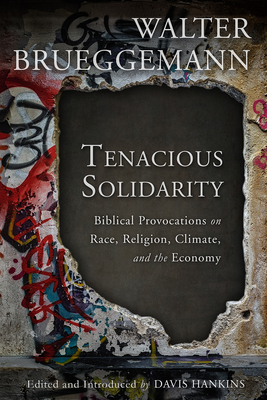 Biblical Provocations on Race, Religion, Climate, and the Economy

Tenacious Solidarity features essays and new writings from 2014 to 2018. As all of Walter Brueggemann's writing is, the chapters are deeply biblical while also concerned with the identities, practices, and obligations of religious communities in contemporary contexts within the United States. Brueggemann consistently attempts to weave the biblical texts--vested as they are with the authority of a storyteller--into the deep contours of his readers' experiences, in order to foster a tenacious solidarity that might overcome both the psychic numbness cultivated by a 24-hour news cycle as well as the anxious possessiveness nurtured by so many privatized spiritualities.

Brueggemann brings the "transformative potential" of the biblical texts to bear on critical contemporary contexts, including but not limited to economic disparities, racial injustice and white supremacy, climate and care for creation, and the power of memory and mentoring. He delves deeply in the Psalms, which he says, "provides a foundational script for living into the fullest and deepest realities of human existence." And he draws from the Prophets his foundational concept of totalism, which he defines as "automated fragmentation of social life such that we habitually and callously disregard our relations with others."