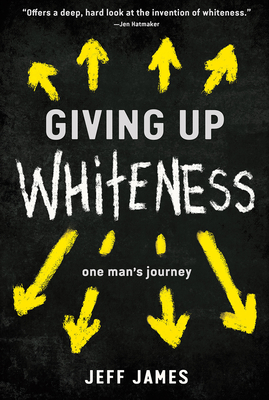 It's one thing to know about white privilege. It's another to try to give it up.

Jeff James was one of the good white guys--or so he thought. But when he asked an African American friend how he could help fight the rising tide of racism, he had to think again. ""Simple,"" she shot back, ""get rid of whiteness.""

Thus began his journey to discover, name, and dismantle the racial category that had defined and advantaged him for a lifetime. In Giving Up Whiteness, James leads readers on an intimate, humble, and disorienting investigation of what it means to be white in twenty-first-century America. He shares his discoveries on just how deeply the forces of race have shaped his own and other white people's choices about where to live, what causes to care about, who to marry, and what church to join. With a blend of honest storytelling and incisive critique, James guides readers through the questions he encountered: How and why were race and, specifically, whiteness invented? What privileges and protections accrue to people categorized as white--and why has it been so difficult to expand them to everyone? How has the white Christian church bolstered white supremacy? Is it even possible to give up whiteness as an identity, and if so, what would that look like?

The things we can't see yield the most power, so it's time to take a hard look at whiteness. Ultimately, James writes, well-meaning white people have a lot of work to do, and it's past time to get started.