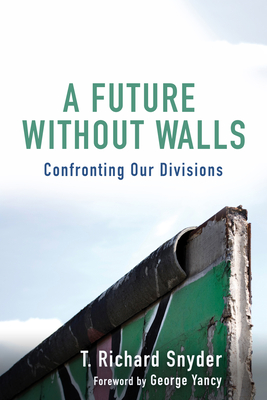 A Future without Walls

A Future without Walls offers a comprehensive and complex analysis of Othering, while unveiling the connections between our divisions and the roots, forms, and consequences of the walls that have been erected. It also offers concrete steps forward to help us dismantle these walls.

In A Future without Walls, T. Richard Snyder draws upon his half-century of activism in the struggle for justice and weaves analysis, prescription, and personal story throughout. Racism, extreme nationalism, xenophobia, gender abuse, bullying, and religious intolerance are all on the rise globally. Walls that many thought had been torn down are now being rebuilt. Those people who are different, and even those who differ, are treated as Other. A Future without Walls is a lamentation for the tragedy of Othering and a clarion call for justice. The dividing walls are more than a problem calling for a quick fix. They are embedded in both our history and our current culture and demand fundamental transformation.

Snyder analyzes the entangled fabric of Othering: its history, roots, various forms, and inevitable violent consequences. Countering this tragedy are the voices of activists, mystics, scientists, philosophers, and theologians--black and white, indigenous and cosmopolitan, Christian, Jew, and Buddhist, female and male--each of whom urges us to embrace rather than exclude. This universal moral imperative is a call to action.

A Future without Walls offers paths to healing and transformation, drawing on both individual and collective actions that have made a difference. Walls that have been erected can be dismantled. And while success is not inevitable, failure to act only guarantees disaster.