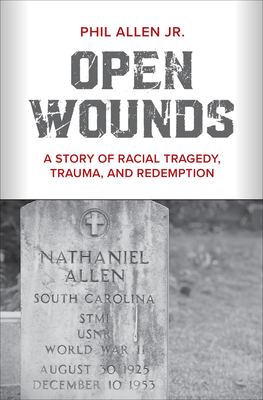 A Story of Racial Tragedy, Trauma, and Redemption

On December 10, 1953, tragedy was visited on a family when Nathaniel Allen was murdered on the Sampit River by his white employer, who lured him into the meeting under the false promise of reconciliation. Allen's death was recorded as an accidental drowning, a deliberate cover-up of the bullet hole seen by more than one witness.

Three generations later, Phil Allen Jr. revisits this harrowing story and recounts the baton of bitterness that this murder passed down in his family.

Through interviews, difficult conversations, and deep theological reflection, Allen takes up the challenge of racism today, naming it for what it is and working to chart a path toward reconciliation.

Open Wounds, and the documentary that accompanies it, is a transformative experience of listening and learning as a grandson looks, laments, an ultimately leads his family and his society forward toward a just and reconciled future. It's an essential part of our national reckoning with racism and injustice.