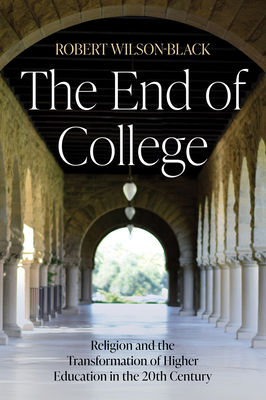 The End of College

Religion and the Transformation of Higher Education in the 20th Century

College in the United States changed dramatically during the twentieth century, ushering in what we know today as the American university in all its diversity. Religion departments made their way into institutions in the 1930s to the 1960s, while significant shifts from college to university occurred.

The college ideal was primarily shaping the few to enter the Protestant management class through the inculcation of values associated with a Western civilization that relied upon this training done residentially, primarily for young men. Protestant Christian leaders created religion departments as the college model was shifting to the university ideal, where a more democratized population, including women and non-Protestants, studied under professors trained in specialized disciplines to achieve professional careers in a more internationally connected and post-industrial class.

Religion departments at mid-century were addressing the lack of an agreed-upon curricular center in the wake of changes such as the elective system, Carnegie credit-hour formulation, and numerous other shifts in disciplines spelling the end of the college ideal, though certainly continuing many of its traditions and structures. Religion departments were an attempt to provide a cultural and religious center that might hold, enhance existential and moral meaning for students, and strengthen an argument against the German research university ideals of naturalistic science whose so-called objectivity proved, at best, problematic and, at worst, inept given the political crisis in Europe.

Colleges found they were losing sight of the college ideal and hoped religion as a taught subject could bring back much of what college had meant, from moral formation and curricular focus to personal piety and national unity. That hope was never realized, and what remained in its wake helped fuel the university model with its specialized religion departments seeking entirely different ends. In the shift from college to university, religion professors attempted to become creators of a legitimate academic subject quite apart from the chapel programs, attempts at moralizing, and centrality in the curriculum of Western Christian thought and history championed in the college model.