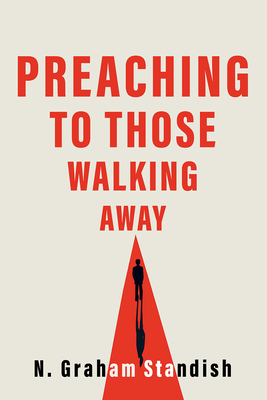 Preaching to Those Walking Away

Preaching to Those Walking Away will help pastors adapt to a world of YouTube, TED Talks, and video marketing in which traditional preaching styles no longer feel authoritative, engaging, or compelling.

N. Graham Standish has long been passionate about reaching out to those who call themselves spiritual but not religious. Determined to help the church connect with them, he shares methods he has tested, refined, and proven effective--approaches to preaching typically not taught in seminaries.

Rather than grounding preaching in traditional homiletical theories and practices, Standish integrates insights from postmodernism, generational theory, multiple-intelligences theory, marketing, communications theory, brain/neurological research, counseling, spiritual formation, TED Talk presentations, motivational theory, and the history of communication styles. Standish developed his ideas about preaching during more than two decades as senior pastor of a healthy, growing congregation that consistently attracted people who had walked away from Christianity and church.

More than half a century ago, Canadian communications theorist Marshall McLuhan said, The medium is the message. But mainline Christianity has been slow to adapt its message to new mediums. The population at large will not adapt to traditional Christian ways of preaching, however, so Standish helps pastors understand the thinking of those walking away and shows preachers how to adapt their thinking about their craft, instead of demanding that those walking away adapt to ours.