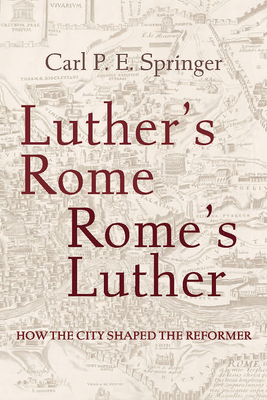 How the City Shaped the Reformer

This book reconsiders the question of Martin Luther's relationship with Rome in all its sixteenth-century manifestations: the early-modern city he visited as a young man, the ancient republic and empire whose language and literature he loved, the Holy Roman Empire of which he was a subject, and the sacred seat of the papacy. It will appeal to scholars as well as lay readers, especially those interested in Rome, the reception of the classics in the Reformation, Luther studies, and early-modern history.

Springer's methodology is primarily literary-critical, and he analyzes a variety of texts--prose and poetry--throughout the book. Some of these speak for themselves, while Springer examines others more closely to tease out their possible meanings. The author also situates relevant texts within their appropriate contexts, as the topics in the book are interdisciplinary.

While many of Luther's references to Rome are negative, especially in his later writings, Springer argues that his attitude to the city in general was more complicated than has often been supposed. If Rome had not once been so dear to Luther, it is unlikely that his later animosity would have been so intense. Springer shows that Luther continued to be deeply fascinated by Rome until the end of his life and contends that what is often thought of as his pure hatred of Rome is better analyzed as a kind of love-hate relationship with the venerable city.