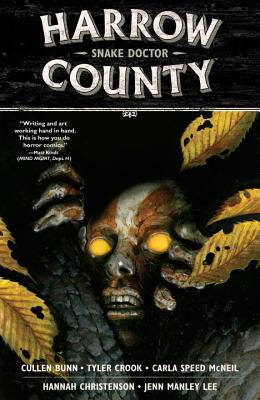 The Skinless Boy seeks to understand the mysteries of his past, and Emmy investigates a decaying old domicile. Meanwhile, a malevolent serpent is sowing madness and malice in the minds of The Holler's residents, and only Bernice stands in the way of this new evil--but could enlisting the aid of the shadowy Lovely Belfont place her in a much more terrible danger? Collecting issues #9-#12 of the hit series by Cullen Bunn and Tyler Crook!

"Harrow County is worth checking out if you're a horror comic fan!" -Clive Barker (Hellraiser)

Cullen Bunn is an American writer of comic books, short stories and novelist, known for his work on comic books such as Deadpool Kills the Marvel Universe for Marvel Comics, and The Damned and The Sixth Gun for Oni Press. His novel work includes the middle reader horror series Crooked Hills and his short story work includes the anthology collection Creeping Stones & Other Stories. In 2011 Bunn was nominated for a Ghastly Awards, and won Broken Frontier's Best Writer Independent Award. In 2012 he was nominated for a Bram Stoker Award and an Eisner Award.
or
Buy Here
(This book is on backorder)
Copyright © 2020 American Booksellers Association