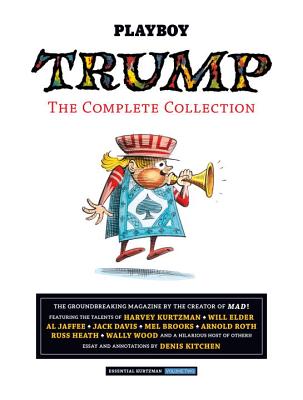 TRUMP was a lavish color satire magazine Harvey Kurtzman created for Hugh Hefner after leaving MAD magazine acrimoniously in 1956. With a star-studded cast (Mel Brooks, Will Elder, Jack Davis, Wally Wood, Al Jaffee) and Playboy's money and clout, TRUMP should have been huge. But for complex financial reasons, Hefner pulled the plug while the third issue was in production. For six long decades, the legendary TRUMP has never been collected . . . until now. With never-before-seen art, including the surviving contents of ithe third issue, this long overdue collection will blow the minds of fans of Kurtzman, satire, and 1950s American pop culture.

"I gave Harvey Kurtzman an unlimited budget at TRUMP, and he exceeded it." -Hugh Hefner

Harvey Kurtzman (1924-1993) was a cartoonist, writer, editor and comics genius. He is probably best remembered for MAD, which he founded in 1952. He created 28 revolutionary issues for E.C. publisher Bill Gaines (for whom he also created Two-Fisted Tales and Frontline Combat) with such talent as Will Elder, Jack Davis, and Wally Wood before leaving in 1956. Kurtzman then created the short-lived satire magazine Trump for Playboy publisher Hugh Hefner in 1957. He followed with the comic-size Humbug in 1958, then Help! magazine. During his Help! tenure he discovered such diverse talent as Terry Gilliam, Gloria Steinem, Gilbert Shelton, and R. Crumb. In 1962 he and collaborator Will Elder began producing the long-running and elaborate Little Annie Fanny comic for Playboy. In the '70s he became known as the "father-in-law of underground comix" for inspiring a new generation of media-bending cartoonists. He passed away in 1993.
Loading...
or
Not Currently Available for Direct Purchase