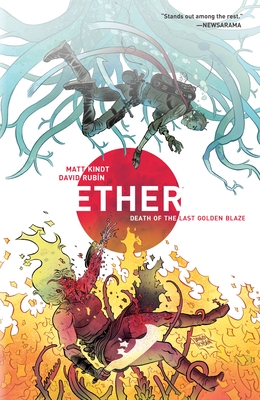 Death of the Last Golden Blaze

A science-minded adventurer gets mixed up in the mysteries of a fantasy world in this charming new adventure from an award-winning creative team. Boone Dias is an interdimensional explorer, a scientist from Earth who has stumbled into great responsibility. He's got an explanation for everything, so of course the Ether's magical residents turn to him to solve their toughest crimes. But maybe keeping the Real and the Abstract separate is too big a job for just one man.

Praise For Ether Volume 1: Death of the Last Golden Blaze…

“When you inadvertently become an inter-dimensional adventurer, you have to hope that the science behind your loopy situation is on your side. But what happens when you land in a reality where magic trumps science? Well, in Matt Kindt and David Rubín’s Ether, the answer is simple: you solve some goddamn magic crimes.”--io9

“Intriguing. [Rubin’s] … wildly imaginative and colorful designs make the world of the Ether spring to life like nothing else you’ll see on this year.”--BLASTR

“Kindt has long proven himself to be one of the most inventive and cerebral comic makers alive today.”--IGN

“David Rubín’s singular style is unlike anything else in this earthly realm. Rubín, whose two-volume anachronistic (and incredibly graphic) Hercules adaptation The Hero is also published by Dark Horse, merges aspects of Paul Pope and Jack Kirby into a madcap cosmic mind-trip all his own. With such promising creators at the helm, Ether seems destined to join Black Hammer and Kindt’s own Dept. H among the ranks of new Dark Horse classics in the making.”--PASTE MAGAZINE

“A fully-realized magical world, shaped by the over-active imaginations of both Kindt and Rubin.”--ENTERTAINMENT WEEKLY

"The Ether is a magical world you want to believe in and visit. Following scientist/adventurer Boone Dias as he tries to uncover a murder mystery, we’re presented with so many colourful fantastical characters, and different places, and the best part is that the characters and places in the “real world” are just as fascinating as everything in the Ether. Matt Kindt and David Rubín are the perfect pair for this story."--Fábio Moon, Two Brothers