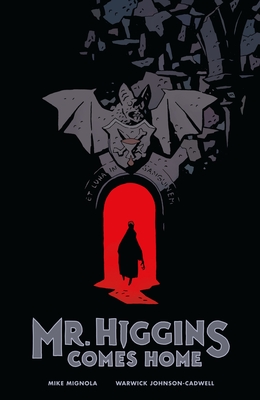 Preparations begin at Castle Golga for the annual festival of the undead, as a pair of fearless vampire killers question a man hidden away in a monastery on the Baltic Sea. The mysterious Mr. Higgins wants nothing more than to avoid the scene of his wife's death, and the truth about what happened to him in that castle. However, these heroic men sworn to rid the world of the vampire scourge, inspire Higgins to venture out and to end the only suffering he really cares about--his own.

Mike Mignola was born September 16, 1960 in Berkeley, California and grew up in nearby Oakland. His fascination with ghosts and monsters began at an early age and reading Dracula at age 13 introduced him to Victorian literature and folklore from which he has never recovered. In 1993 Mike moved to Dark Horse comics and created Hellboy, a half-demon occult detective who may or may not be the Beast of the Apocalypse. While the first story line Seed of Destruction, was co-written by John Byrne, Mike has continued writing the series himself. There are, at this moment, numerous Hellboy graphic novel collections with more on the way, several spin-off titles (BPRD, Lobster Johnson, Abe Sapien and Witchfinder), three anthologies of prose stories, several novels, two animated films, and two live action films staring Ron Perlman. Hellboy has earned numerous comic industry awards and is published in a great many countries.
Loading...
or
Not Currently Available for Direct Purchase