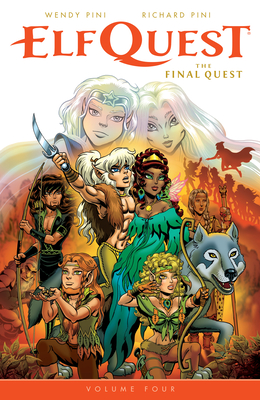 A tribe of elves navigates friendships and dangerous enemies in a fantasy world of goblins, dwarves, fairies and humans!

This is it -- the startling conclusion to the most world-changing chapter in all of ElfQuest: Final Quest! It is time for the Palace of the High Ones to return the elves of the World of Two Moons to their original Star Home, but not all have chosen to go. As human invaders threaten the sacred Father Tree itself, in the heart of the Wolfriders' home, freedom of choice comes with a terrible price.

Volume 4 collects issues #19-24 of The Final Quest, Wendy and Richard Pini's newest and most mind-blowing adventures of the Wolfriders!

Wendy Pini was born Wendy Fletcher in San Francisco. Growing up on an isolated ranch in Gilroy, California, Wendy's imagination was fueled by all forms of fantasy and mythology. At an early age she began spinning her own tales of elves, monkey-gods, aliens, and sorcerers. While her artistic talents were influenced by turn-of-the-century illustrators, film, and TV animation, her storytelling abilities evolved from a love of Shakespeare, Japanese history and legend, modern fantasy, and the epic poetry of the Ramayana. In 1977, a deeply personal project called ElfQuest was born. As the first continuing fantasy/adventure graphic novel series in America to be cocreated, written, and illustrated by a woman, ElfQuest became a phenomenon in the comics industry. Appealing to comics and sci-fi/fantasy fans alike, it attracted a unique and unprecedented audience, an equal mix of male and female readers. More than three million copies of the collected graphic novel volumes have been sold to date.

Richard Pini is one half of the husband-and-wife team responsible for creating the well-known Elfquest series of comics, graphic novels, and prose works.
Loading...
or support indie stores by buying on