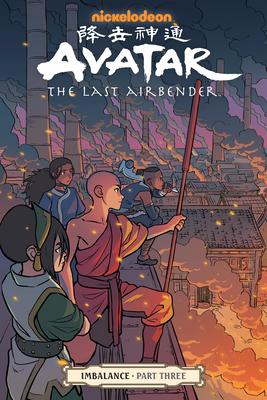 Team Avatar faces their most dangerous foe yet as the bender vs. non-bender conflict turns into an all-out war in this action-packed conclusion to the Imbalance arc!

While Aang grapples with a life-changing decision that only he can make as the Avatar, Toph and Katara implore him--from opposite sides--to choose a path. Meanwhile, Ru and Yaling concoct a fiery ploy to get their mother back. The bender vs. non-bender conflict finally reaches a powerful boiling point, and for better or for worse, Cranefish Town will never be the same!

Written by Faith Erin Hicks (The Adventures of Superhero Girl, The Nameless City) and drawn by Peter Wartman (Stonebreaker), in collaboration with Avatar: The Last Airbender creators Michael Dante DiMartino and Bryan Konietzko, this is the ultimate continuation of Avatar!

Faith Erin Hicks is a Canadian writer and artist. She worked in the animation industry for several years before transitioning into writing and drawing comics full time in 2008. She started making comics "for fun" and putting them on the web when she was in college. Her first published work was Zombies Calling (SLG Publishing) in 2007. Since then, she has published a number of other graphic novels, including The War at Ellsmere (SLG), Brain Camp (with Susan Kim and Laurence Klavan, First Second Books), Friends with Boys (First Second Books), Nothing Can Possibly Go Wrong (with Prudence Shen, First Second Books), The Adventures of Superhero Girl (Dark Horse Comics), The Last of Us: American Dreams (with Neil Druckmann, Dark Horse Comics), and the Bigfoot Boy series (with J. Torres, Kids Can Press). She won an Eisner Award in 2014 for The Adventures of Superhero Girl.

Faith currently lives in Vancouver, BC with her partner, Tim, and their helpful cat. Her current project is The Nameless City, a three book series with First Second Books.