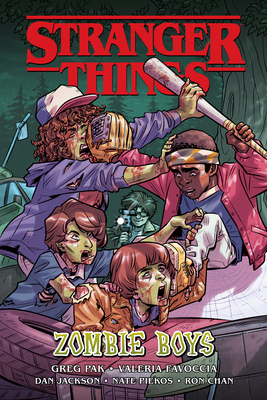 Following the events of season one of Netflix's pop-culture sensation Stranger Things, our main characters struggle with returning to normal life after overcoming supernatural horror.

School is back in session in the normally quiet town of Hawkins, Indiana. Mike, Lucas, Dustin, and Will are still grappling with the traumatic encounters with the Demogorgon and the Upside Down in season one of the hit Netflix series. As tensions rise and fractures begin to form in the group, a new kid shows up to AV club with a Betamax Camcorder and an idea. The new Spielberg-wannabe friend, Joey Kim, wants to make a horror movie about a local legend, but when he sees Will's drawings, he discovers that his new friends are local legends.

Greg Pak is a comic book writer and filmmaker best known for Action Comics and Batman/Superman for DC Comics, Planet Hulk and Magneto Testament for Marvel Comics, and the Code Monkey Save World graphic novel and The Princess Who Saved Herself children's book, based on the songs of Jonathan Coulton. He directed the award-winning feature film Robot Stories and dozens of shorts, including Happy Fun Room. He was named one of 25 Filmmakers to Watch by Filmmaker Magazine, described as "a talent with a future" by the New York Times, and named Breakout Talent of the year by Wizard Magazine. Pak also co-wrote the fan favorite Incredible Hercules series with Fred Van Lente, with whom he also wrote the new how-to book, Make Comics Like the Pros. The author lives in New York, New York.
Loading...
or support indie stores by buying on