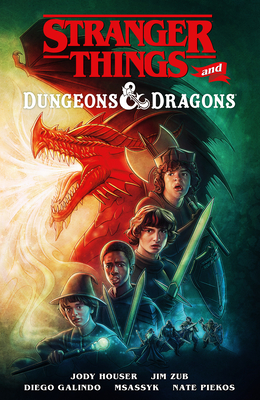 Follow the crew from Hawkins, Indiana, as they discover the legendary monsters and epic adventures of the Dungeons & Dragons tabletop role-playing game together.

Long before the dreaded Demogorgon took one of them to the Upside Down, watch Mike, Lucas, and Will bond with Dustin for the first time over the game that would define their childhood. See the party come together as a team through communal stories and perilous quests to learn important lessons about friendship and find the courage to stand up to the bullies that challenge their everyday.

Written by comics and RPG all-stars Jim Zub (Rick and Morty vs. D&D, Conan: Serpent War, Dungeons & Dragons: Infernal Tides) and Jody Houser (Critical Role: Vox Machina, Stranger Things, Star Wars), with vorpal-sharp line art from rising talent Diego Galindo (Power Rangers, Kino) and eye-popping colors from MsassyK (Isola) that strike as true as a Magic Missile. Dive into this love letter to a game that has defined role-playing through the lens of your current favorite icons of eighties nostalgia.

Jody has written Faith for Valiant Comics, Max Ride: Ultimate Flight and Agent May for Marvel, and Orphan Black for IDW. She has been a contributing writer to numerous comic anthologies including Avengers: No More Bullying, Vertigo CMYK: Magenta, and both Womanthology series.